On the suggestion of a friend, I'm reading* Christopher Hitchens' Letters to a Young Contrarian

, which is an engaging book on being a dissenter from back before Hitchens started un-dissenting the invasion of Iraq and started his second career as cheerleader for the Bush administration foreign policy and professional atheist. (I only enjoyed the second of these two careers, obviously.)

Letters ... , which I think I'll finish today, is, like most of Hitchens, equal parts riveting and vexing. Not so much the letters to the young of the title as an indulgent work of justification for living a life in opposition. Despite the epistolary format, it seems a work more adressed to the self, justifying himself to himself. It demonstrates the way a self-image as being the reincarnation of Emile Zola can turn out to be just so much hot air if you don't take care to keep up the intellectual rigor all the way to the finish line.

But it's also a very inspiring little book, teaching methods for independence, frumpiness and  being against majority opinion. He reminded me of what the people who taught Plato in university kept pounding into us, about how the thinker should always be slightly off.


Hitchens, as always, is worth reading if nothing else then for the relentlessly quotable prose. One of the finer writers of the 20th century. I get all self-conscious about phrasing when I'm writing about him.

I'll just pick one of the online quotes, being too lazy to type:


Every day, the New York Times carries a motto in a box on its front page. "All the News That's Fit to Print," it says. It's been saying it for decades, day in and day out. I imagine most readers of the canonical sheet have long ceased to notice this bannered and flaunted symbol of its mental furniture. I myself check every day to make sure that the bright, smug, pompous, idiotic claim is still there. Then I check to make sure that it still irritates me. If I can still exclaim, under my breath, why do they insult me and what do they take me for and what the hell is it supposed to mean unless it's as obviously complacent and conceited and censorious as it seems to be, then at least I know I still have a pulse. You may wish to choose a more rigorous mental workout but I credit this daily infusion of annoyance with extending my lifespan.

I love that he never quite says what's wrong with the phrase: figure it out for yourselves. I also love his totally unapologetic use of words that you've never heard before. Go look them up, lazy plebeians.

There's also a video of an interview on the book from 2001 I might watch in my abundant spare time. It's about an hour long, 7 parts. Here's part 1. 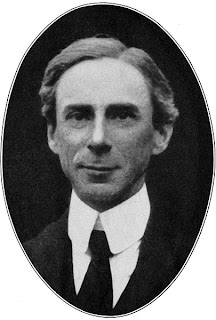 This evening, I also stumbled on another favorite dissenter of mine, Bertrand Russell (who Hitchens quotes frequently, and whose memoirs from the First World War

I was reading this winter – his opposition to that war being one of Hitchens' canonical acts of contrarianism). By accident, I found a post on the Open Culture blog quoting ten liberal commandments. They are well put, and seem to harmonize well with the Hitchens book, so I'll post them here. The entire article can be read here.


1. Do not feel absolutely certain of anything.
2. Do not think it worth while to proceed by concealing evidence, for the evidence is sure to come to light.
3. Never try to discourage thinking for you are sure to succeed.
4. When you meet with opposition, even if it should be from your husband or your children, endeavour to overcome it by argument and not by authority, for a victory dependent upon authority is unreal and illusory.
5. Have no respect for the authority of others, for there are always contrary authorities to be found.
6. Do not use power to suppress opinions you think pernicious, for if you do the opinions will suppress you.
7. Do not fear to be eccentric in opinion, for every opinion now accepted was once eccentric.
8. Find more pleasure in intelligent dissent that in passive agreement, for, if you value intelligence as you should, the former implies a deeper agreement than the latter.
9. Be scrupulously truthful, even if the truth is inconvenient, for it is more inconvenient when you try to conceal it.
10. Do not feel envious of the happiness of those who live in a fool's paradise, for only a fool will think that it is happiness.

* Reading, as in: not writing. I know I'm out of practice writing. I know this is a pretty boring post. I just need to start writing again, anything, or one day I'll wake up and not know how to write anymore.


"I also love his totally unapologetic use of words that you've never heard before."

Umm, huh? A guy who reads Adorno and Melville for fun being impressed by the use of...I’m not even sure what – «censorious»?

:-)
Sorry about the radio silence. I'll try to start posting again, but it's hard to find the time.

Re: Adorno, I have done many crazy things in my life, but reading Adorno *for fun* is surely not one of them. You need to be seriously masochistic for that. Melville OTOH ...

Hitchens had a terrific vocabulary! He would toss out words like "pachydermatous" (being thick-skinned, like an elephant) or "provenance" or "effluvium" or "simian" without it sounding like he was being sesquipedalian in order to be a wanker. Something to aspire to.