I just found someting interesting in Richard Wilkinson and Kate Picketts awesome book — which you should read! — The Spirit Level

. For those who haven't read the book, it's basically an argument, with substantial empirical evidence, that income inequality within a country is a much better predictor for the health of that society than anything else, above a certain minimum standard which guarantees physical well-being. This goes for any number of kinds of social well-being: physical and mental health, teen pregnancy, social trust, obesity, violence, crime ... and drug use, which is what I'm going to focus on here.

But in short, what this means is that the primary goal of capitalist economies — growing the economy, achieving a greater GDP, a rising tide lifts all boats, etc. etc — is just not the right place to start. Once you get above a minimum standard of living, where all people have enough food, a place to live, decent and universal healthcare, and so forth, there's not that much national income increase does for life expectancy (the graph looks like this). After that, you should focus on reducing the gap between the richest and the poorest. Making the poor a little bit richer and the rich a little bit poorer is quite simply great policy — and, surprisingly, not just for the poor (which would have been enough for me, since there are way more of them)! The lowering of income inequality turns out to benefit all strata of the population. Even the richest people in a more equal society like Norway are healthier than the vastly more rich people in unequal societies like the US, the UK or Portugal.

This is research with enormous implications for policy across the world. For a short version of their argument, I recommend this riveting one hour-talk in seven parts by Wilkinson and Pickett. Possibly the lecture I've seen with the greatest number of graphs relative to the wow-this-is-actually-interesting-factor. Here are the videos: 1, 2, 3, 4, 5, 6, 7.

So anyway, about those drugs. At one point (p. 71 in my edition), Wilkinson and Pickett have a graph showing, as it does with all the social unhealth factors they discuss, that there is a fairly linear relationship between drug use and inequality. Very unequal countries have very high drug use levels, and very equal countries have very low levels. 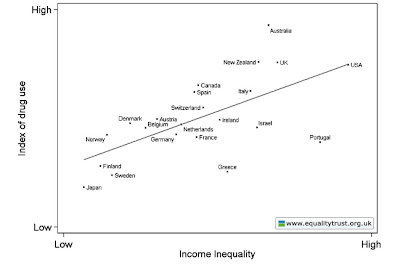 A few interesting things jump out from the graph. The first is that Wilkinson and Pickett are probably right that there is some form of causal relationship between the two factors.

The second is that there are a couple of interesting outliers. Australia has a lot more drug users than it "should" have. Portugal and Greece have much fewer. My own country Norway, despite being a very equal country, has a drug problem: we have an incidence of drug abuse roughly the same as very unequal Portugal. My other country, Denmark, also does. This coincides with our unbelievably high incidence of heroin addicts, so dramatic that the New York Times covered it, particularly in Oslo, Bergen and Haugesund.

The third is that while there are a number of countries for which the function of the average (the line through the graph) is a good predictor of actual results, two countries stand out as being completely accurately predicted by the average line.

These countries are the USA and Netherlands. Those two countries are very interesting, drug policy-wise. One represents the world's laxest drug policy, the other represents the most draconian policy in the developed world, going so far in the War on Drugs as to fund low-intensity conflicts in Latin America and to imprison a greater proportion of their population than literally any other country on Earth, in order to decrease drug use.

What could possibly explain the fact that both these policies, so radical and so radically different, have zero effect on their country's place on the abuse scale? Well, golly, I don't know. But I have a suggestion.

I suspect that the function of the average in this chart in fact represents the normal, "background" amount of drug abuse in the developed world. And that the reason these two countries are right on top of it is that their policies are zero-effect policies.

The Netherlands outlaws "hard drugs" like heroin and legalises "soft drugs" like cannabis. Both kinds of drugs are included in the Wilkinson/Pickett graph's x-axis. Studies show that soft drug use in the Netherlands is roughly the same as in other countries, but without many of the attendant social problems. Hard drug use is slightly higher for a number of reasons, but because of treatment programs, this problem is fairly well contained.

The US, on the other hand, has aggressively irrational policy against drug use. It has been well-documented that the War on Drugs actually drives a negative dynamic in which more drugs become available, more people use them and more people sell them. Despite one million people going to jail every year for drug crimes (225.000 for cannabis-related crimes), the drug market equalises back to zero. The war on drugs, paradoxically, subsidises the drug industry. Because they push back so hard, the very unequal US cancel out their own anti-drug policy and end right back up where they started, with a high incidence of drug abuse. In the meantime, a lot of people suffer and die because of the draconian policy.

So let's go back to the outliers. The one I'm really interested in is Portugal. It's an enormously unequal country, with bad results on a lot of other indexes of social health — but not on this one. Why not? Why does really unequal Portugal have equal drug abuse levels as very equal Norway? Well, Portugal has decriminalized drug use. From a great white paper on Portugal's drug laws by blogger and lawyer Glenn Greenwald:

While drug addiction, usage, and associated pathologies continue to skyrocket in many EU states, those problems—in virtually every relevant category—have been either contained or measurably improved within Portugal since 2001. In certain key demographic segments, drug usage has decreased in absolute terms in the decriminalization framework, even as usage across the EU continues to increase, including in those states that continue to take the hardest line in criminalizing drug possession and usage.

By freeing its citizens from the fear of prosecution and imprisonment for drug usage, Portugal has dramatically improved its ability to encourage drug addicts to avail themselves of treatment. The resources that were previously devoted to prosecuting and imprisoning drug addicts are now available to provide treatment
programs to addicts. Those developments, along with Portugal’s shift to a harm-reduction approach, have dramatically improved drugrelated social ills, including drug-caused mortalities and drug-related disease transmission. Ideally, treatment programs would be strictly voluntary, but Portugal’s program is certainly
preferable to criminalization.

It seems, given these data, that the proper way to combat drug abuse and drugs as a social problem is two-pronged. On the one hand, combating income inequality which has benefits across society, and moving towards decriminalisation and treatment like Portugal and the Netherlands have done.

On a completely unrelated note: I joined something called The Amazon Affiliates Program. Basically what that means is that if you click the link to The Spirit Level

here or above, and you buy the book from Amazon after clicking that link, I get 15 % of the revenue in Amazon gift cards. So if you're thinking about buying The Spirit Level

anyway, if you do it through this website, you can give me a little something.

This is the first time in – oh, God, I'm old – seven whole years of blogging that I've done anything to monetize this site. And while I do it with some trepidation, I don't think this changes the basic proposition of my blog which is that I write about what I want to write about (In this case, The Spirit Level

). Though I do now feel compelled to link to Amazon.com in every single post I write.

No, not really. It was actually the other way around: I've been thinking for a long time that responding to what you are reading in writing is important, and it's something I haven't done enough, and want to do more of in this space. So given that my blog might go in that direction, and I noticed that I was going to link to The Spirit Level

— I figured this might be a good time to put the Amazon affiliates thing in place, which I've thought about doing for a long time.

But lord knows I'm not going to get a lot of money out of this. My hope is that it gives me a little extra incentive to keep the blog going, and a little bit of return for what I want to do here anyway. Even though it makes me a complete and utter sell-out.