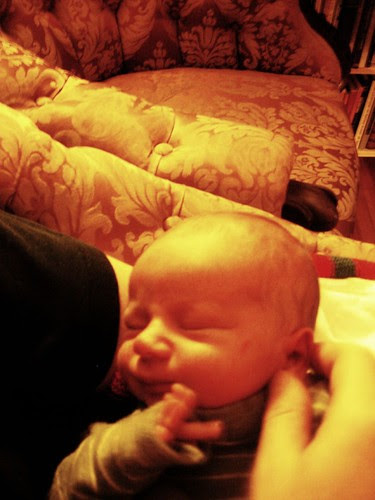 On the 26th, Mikkel and Sara (mostly Sara) gave birth to a beautiful little boy, and I became an uncle for the fifth time. This tiny bundle of awesomeness is named Falk, and he must be the impatient type, because he took all of an hour and fifteen minutes getting here. Welcome to the family, kid, here's your umlaut. Read all about him over at Shädy.

From Bah, Humbug: The origins of christmas as enterprise. Gift-giving and market forces in industrial England and early modern capitalism by Charles Dickens:

``Now, I'll tell you what, my friend,'' said Scrooge, ``I am not going to stand this sort of thing any longer. And therefore,'' he continued, leaping from his stool, and giving Bob such a dig in the waistcoat that he staggered back into the Tank again: ``and therefore I am about to raise your salary!''

Bob trembled, and got a little nearer to the ruler. He had a momentary idea of knocking Scrooge down with it; holding him, and calling to the people in the court for help and a strait-waistcoat.

``A merry Christmas, Bob!'' said Scrooge, with an earnestness that could not be mistaken, as he clapped him on the back. ``A merrier Christmas, Bob, my good fellow, than I have given you for many a year! I'll raise your salary, and endeavour to assist your struggling family, and we will discuss your affairs this very afternoon, over a Christmas bowl of smoking bishop, Bob! Make up the fires, and buy another coal-scuttle before you dot another i, Bob Cratchit.''

Scrooge was better than his word. He did it all, and infinitely more; and to Tiny Tim, who did not die, he was a second father. He became as good a friend, as good a master, and as good a man, as the good old city knew, or any other good old city, town, or borough, in the good old world. Some people laughed to see the alteration in him, but he let them laugh, and little heeded them; for he was wise enough to know that nothing ever happened on this globe, for good, at which some people did not have their fill of laughter in the outset; and knowing that such as these would be blind anyway, he thought it quite as well that they should wrinkle up their eyes in grins, as have the malady in less attractive forms. His own heart laughed: and that was quite enough for him.

He had no further intercourse with Spirits, but lived upon the Total Abstinence Principle, ever afterwards; and it was always said of him, that he knew how to keep Christmas well, if any man alive possessed the knowledge. May that be truly said of us, and all of us! And so, as Tiny Tim observed, God Bless Us, Every One!

But seriously, folks:
Merry Christmas to you and yours, and [Tiny Tim Voice]: God Bless Us, Every One.

Bad Lingo has a list of linguistic blog clichés. It's Bordieu's distinction being shifted by the cultural hegemony, yo.

Since I'm so far removed from the glowing center of molten hipness that is US internet culture, I actually still think most of these are hysterically funny. I'm so unhip.

I have been chosen as TIME's person of the year 2006! I am totally putting that on my resume.

The merde hits the semicolon

(…) doesn’t a sentence, whatever meaning it releases, subsequent to its utterance, it would seem, appear to be telling us simple, literal, primitive: something true, in relation to which all the rest (which comes afterwards, on top) is literature? [emphasis added]

And this is the end of the following... "sentence":

Ideologically, finally, this game has the advantage of affording the classic text a certain innocence: of the two systems, denotative and connotative, one turns back on itself and indicates its own existence: the system of denotation; denotation is not the first meaning, but pretends to be so; under this illusion, it is ultimately no more than the last of the connotations (the one which seems both to establish and to close the reading), the superior myth by which the text pretends to return to the nature of language, to language as nature: doesn’t a sentence, whatever meaning it releases, subsequent to its utterance, it would seem, appear to be telling us simple, literal, primitive: something true, in relation to which all the rest (which comes afterwards, on top) is literature?

I wouldn't even know how to begin to diagram that sentence. For those of you keeping score at home, that sentence contains 3 colons, 2 semicolons, 14 commas
and 2 sets of parentheses.

Augusto Pinochet, 91, Ex-Dictator of Chile, Dies. Said one gentleman in Norway:"break out the champagne!"

Suttonhoo reminds me that today is Human Rights Day.

The Universal Declaration of Human Rights is one of those documents that one should read more often. I don't, though, because I get angry when I do. It's so easy to forget that these things have been codified in law, and sometimes so hard to remember that these things are our rights, even in the face of power and violence. I feel the gall rising when even these simple rules are blatantly and obviously ignored by people thinking themselves democrats.

Aaand, in case you hadn't noticed yet, Europe just had the warmest autumn in at least 500 years. There goes the neighbourhood. I miss the snow, and I dream about the Apocalypse.

December will be magic again.

Take a husky to the ice
While Bing Crosby sings White Christmas. He makes you feel nice.
December will be magic again.
Old Saint Nicholas up the chimney,
Just a-popping up in my memory.

Ooh, dropping down in my parachute,
The white city, she is so beautiful
Upon the black-soot icicled roofs,
Ooh, and see how I fall.
See how I fall
("Fall!") [backwards]
Like the snow.

December will be magic again.
Light the canDLe-lights
To conjure Mr. Wilde
Into the Silent Night.
Ooh, it's quiet inside,
Here in Oscar's mind.

December will be magic again.
Kiss under mistletoe.
Don't miss the brightest star.

I want to hear you laugh.
Don't let the mystery go now.

Ooh, dropping down in my parachute,
The white city, she is so beautiful
Upon the black-soot icicled roofs,
Ooh, and see how I fall.
See how I fall
("Fall!") [backwards]
Like the snow.

Now lawyers for Mr. Padilla, 36, suggest that he is unfit to stand trial. They argue that he has been so damaged by his interrogations and prolonged isolation that he suffers post-traumatic stress disorder and is unable to assist in his own defense. His interrogations, they say, included hooding, stress positions, assaults, threats of imminent execution and the administration of “truth serums.”

A Pentagon spokesman, Lt. Col. Todd Vician, said Sunday that the military disputes Mr. Padilla’s accusations of mistreatment. And, in court papers, prosecutors deny “in the strongest terms” the accusations of torture and say that “Padilla’s conditions of confinement were humane and designed to ensure his safety and security.”

“His basic needs were met in a conscientious manner, including Halal (Muslim acceptable) food, clothing, sleep and daily medical assessment and treatment when necessary,” the government stated. “While in the brig, Padilla never reported any abusive treatment to the staff or medical personnel.”

Also, I thought that depriving someone of all human contact except for brutal interrogations and giving them nothing to read at all for three years, while keeping them in a windowless cell without even charging them with a crime was abusive in itself, but apparently that's safe and humane, and probably more than these people bastards deserve.

In his affidavit, Mr. Patel said, “I was told by members of the brig staff that Mr. Padilla’s temperament was so docile and inactive that his behavior was like that of ‘a piece of furniture.’ "

“It is my opinion that as the result of his experiences during his detention and interrogation, Mr. Padilla does not appreciate the nature and consequences of the proceedings against him, is unable to render assistance to counsel, and has impairments in reasoning as the result of a mental illness, i.e., post-traumatic stress disorder, complicated by the neuropsychiatric effects of prolonged isolation,” Dr. Hegarty said in an affidavit for the defense.

But, Mr. Patel said in his affidavit, his client is nonetheless mistrustful. “Mr. Padilla remains unsure if I and the other attorneys working on his case are actually his attorneys or another component of the government’s interrogation scheme,” Mr. Patel said.

“During questioning, he often exhibits facial tics, unusual eye movements and contortions of his body,” Mr. Patel said. “The contortions are particularly poignant since he is usually manacled and bound by a belly chain when he has meetings with counsel.”

My memory is also getting really bad. I seem to recall reading somewhere that people had a right to be charged with a crime or go free. I also have this false memory of reading that long-term isolation from other people does irreparable damage to the human psyche, and could therefore be falsely misconstrued as "torture" instead of just being interrogation techniques and confinement. But whatever. He's just a human being terrorist scum, anyway.

But it really is too bad that I've all this time misunderstood all these words. I've even been working as a translator! Imagine that! I completely misunderstood all the words these government officials are using. If only there was a word for that. I should go read up on my dictionary. I don't know anything.

Here's an absolutely horrific transcript of the first White House Press Conference in which AIDS was mentioned.

Mikkel reminds me that today is

As I said in this post, 2.9 million people died of AIDS last year. A significant proportion of them in Sub-Saharan Africa, where entire generations are growing up orphaned, if they're growing up at all. Life expectancy at birth in Swaziland is 32.6 years. That's about the same life expectancy we had in the Stone Age. Think about that. The Stone Age means: no modern medicine. No doctors. No housing. A lifestyle which mostly involved getting in front of big, angry things and trying to kill them, which is why many Stone Age remains have bone breaks similar to those found in rodeo riders. Guess why the life expectancy is so low. Modern civilization is not doing anything for these people. 10.000 years of culture is doing precisely squat for them, because they're poor.

Despite being reduced to caveman life-expectancy, pharmaceutical companies still have not made their drugs cheaply available in developing countries. In March, 2001, 40 pharmaceutical companies sued South Africa for allowing production of generic drugs, and importing generic drugs from other countries. Because the profit margin is really the important thing here. Luckily, their lawsuit failed. But still to this day we have medicines that turn HIV, a death sentence, into an unpleasant, but liveable chronic illness... For the rich and wealthy in the west. If you're poor, you're shit out of luck. Unless you happen to live in a country with a decent health care system.

Use the day to influence your politicians.