Fantastic post at Kottke.org about collective history online. The post is basically a collection of links to massive online archives of media material from major US magazines and newspapers.

Paal Bjelke of Nypoesi.net shows us the results of the search string "tibet" on the Olympic website.

I'm back from a long weekend cross-country skiing in the mountains. Going beyond cellular coverage and wireless email really is one of the great luxuries of our age. There's something about sitting in a small cabin miles away from anywhere anyone could get a hold of you which helps you focus. Conversation seems to turn naturally towards what is important, and all the noise of the everyday fades into the background. 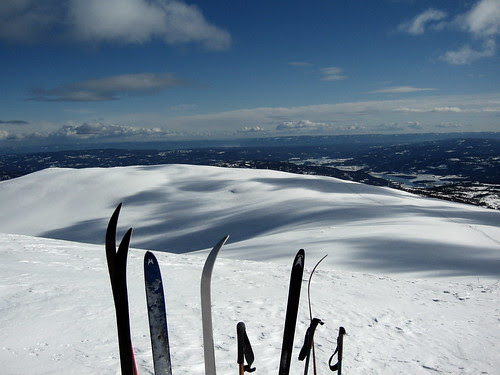 Just so you don't think I'm going all luddite on you, I note that the Wikipedia article on "blog" has grown a lot since I saw it last time. It has an interesting history of early blogging-section now.

I was listening to a part of a lecture series called "Ethics and Public Policy" just now. The lectures, made in 1991 by the funny, insightful, rambling and delightfully Jewish political philosopher Ed Beiser, concern the idea of rights and law in the public sphere. It would probably be immoral of me to suggest that one could download the lecture series from this torrent here. Would it be legal of me to say so? Hard to say.

At one point, Beiser makes an interesting argument about what I suspect are different conceptions of rights between capitalist societies like the US and proto-socialist societies like the USSR*. He says that the conception of rights in the US is a negative conception. You have freedom of the press in the US, but the formulation is "Congress [i.e. the government] shall make no law" abridging freedom of religion, the press &tc. The freedom to assemble is the freedom to not be disassembled by the government.

The formulation of the first Soviet constitution is an entirely different approach.

14. For the purpose of securing freedom of expression to the toiling masses, the Russian Socialist Federated Soviet Republic abolishes all dependence of the Press upon capital, and turns over to the working people and the poorest peasantry all technical and material means for the publication of newspapers, pamphlets, books, etc., and guarantees their free circulation throughout the country.

15. For the purpose of enabling the workers to hold free meetings, the Russian Socialist Federated Soviet Republic offers to the working class and to the poorest peasantry furnished halls, and takes care of their heating and lighting appliances.

It occurred to me that both these notions of freedom of the press are obsolete in their own way. The negative version is obsolete because the oppression these days comes through entirely different channels (Clear Channel & Fox News, for instance), and takes the form of oligarchic capitalism, neo-imperialism and cultural hegemony instead.

The positive version is obsolete simply because the technological revolutions made in the 17 years which have passed since the early 90s have made mass syndication and distribution available to everyone with a PC. Technology solved the problem of scarcity of mass distribution. The problem now is more the perennial one of getting people's attention. Am I right, guys? Guys?

The Norwegian word "Føre" is untranslatable, but is indicative of how good the snow is for skiing. Good føre is good for skiing, bad is not. It is the condition of the snow which dictates whether you are gliding in a zen-like trance across soft, light, fluffy perfection or skating roughly across an icy shell roughly the constistency of a slush puppie, which drags you backwards on uphill treks and makes you go too fast and lose all control downhill - yet somehow seems to solidify into head-crackingly hard ice when you fall. We had almost perfect føre this weekend. Føre, like weather, is also a great metaphor for conditions which dictate your actions and your possibilities, like parental mental health or world capitalism or whatever.

To belabour the metaphor: going into the wild gives your thoughts great føre, until you run out of food, at which point you start thinking more and more about the ethics of cannibalism. Fortunately, Mikkel B's cooking skills don't decrease just because he is working on a propane stove in the middle of nowhere.

I made brussel sprouts poached in cider with apples and onions last night. It tastes amazing and you should try it. This recipe is totally copied from the book I used. They just changed a sentence here and there.

Also, Shädy Äcres reveals that in the future, people will look a lot like me. I think these utopian futures are a little childish, to be honest. I prefer the gritty realism of future worlds where most people do not look like me.

Here's a paper that economist and sci-fi geek Paul Krugman wrote in the late 1970s on the problem of interstellar trade. It's nerdy and funny.

Oh, wait, I meant Alastair Campbell! Yes, he is nominated - longlisted, that is - for the Orwell award. That's Orwell as in George Orwell, author of 1984. The Orwell award is for people who fulfill Orwell's ambition to "make political writing into an art". Note: art, not fiction.

For those of us who are just joining us, Alastair Campbell, former communications director for Tony Blair, is a man who - and this is a matter of public record - lied for a living. His lies helped lead his country into an unneccessary war in Iraq. He said one thing openly while doing another thing covertly. To put it another way, he would probably not qualify for the Orwell Award which is something else entirely than the Orwell Prize.

Somebody possibly winning an award for political writing which was obviously untrue, someone holding opposing thoughts in his head at the same time? A state which misleads its own citizen... There's an adjective for this: orwellian. Maybe the judges confused the term when they awarded the prize.

I'll leave you with this little snippet from Campbell's Wikipedia page, just to remind you of who we're dealing with.

A few months later he became embroiled in further controversy after the BBC reporter Andrew Gilligan broadcast claims that the government had included evidence it knew to be false (famously described as "sexed up" by another BBC journalist) in an earlier dossier (about Iraqi Weapons of Mass Destruction). In a later newspaper article Gilligan said that his source had specifically identified Campbell himself as responsible for the alleged exaggerations. Campbell demanded a retraction and apology from the BBC, but none was forthcoming.

The BBC's source, Dr David Kelly, identified himself to his employers at the Ministry of Defence. The government released this news and under questioning from newspapers desperate to identify the source gave sufficient hints for his identity to become public. Kelly committed suicide shortly afterward and the Hutton inquiry into the circumstances of his death pushed Campbell further into the limelight. The inquiry showed that Campbell had been working closely with the Joint Intelligence Committee (JIC), in which the different sections of the intelligence services meet, and made suggestions about the wording of the dossier. He had also been keen that Kelly's identity be made public writing in his diary, "It would fuck Gilligan if that were his source". However, Lord Hutton cleared Campbell of acting improperly, as JIC had taken all editorial decisions. Hutton also found that Kelly's name would have had to be made public to avoid allegations of a cover-up. The Hutton report was widely criticised in the media, however, and Campbell's "Presidential"-style press conference afterwards was perceived by some to be misjudged, with Campbell attacked for appearing to gloat over the BBC's misfortune. This criticism increased when Campbell sold a signed copy of the Hutton report at a charity auction. Comments in his recently published diaries are contradicted by some of the statements made during the Inquiry, leading some to call for a re-examination of the evidence, particularly telephone calls made to Dr. Kelly in the week before his suicide. Although this seems unlikely as the Hutton inquiry had access to Campbell's diaries for the period.

There's a really good obituary of Gary Gygax, the creator of Dungeons & Dragons, at the NY Times. The author, an editor at Wired, connects Gygax' role-playing inventions with the electronic avatars of web 2.0. According to his argument, Facebook and MySpace are cast in the templates of tabletop character sheets. I have to say it's a surprisingly convincing argument. There always did seem to be an unusually strong link between early and powerful internet adopters and sci-fi and roleplaying fandom. Maybe that's the reason. I never really thought of that before.

The article is also noteworthy for the flowchart illustration (click "enlarge this image" to see it). To someone like me, who spent too much time playing AD&D and reading William Gibson in his teens, that flowchart is funny and eerily accurate.

This page has what appears to be a good translation into English of roughly 1/6th of Inger Christensen's long poem Alphabet. It is one of the most important works of post-war Danish literature.

Daily Kos: It's all over for Clinton

A blogger at the Daily Kos has crunched the numbers. Basically he's arguing that

so therefore it's virtually impossible for Obama to lose at this point unless he is caught on camera making out with bin Laden and Farrakhan in an abortion clinic or something. Or confesses to being an atheist.

As I have been saying re: Biodiesel: it's just not a good solution.