"so in other words, do we torture them, or just subject them to excruciatingly painful physical interrogation stress techniques?"

This is the funniest take I've seen on torture hypotheticals. Torture hypotheticals are crazy, unrealistic hypothetical scenarios meant to justify torture in "just these extreme cases". They usually go something like "we know that an atomic bomb is somewhere in New York City and for some odd reason, we can't scan for radiation, and we happen to know for sure that this one guy (named Mohammed) knows -for sure- where that bomb is, and how to disarm it, and we know that he'll only say it under torture, and besides we don't have time for anything else, because we know for sure that it will go off within the hour, and anyway..."

These things seem to be everywhere in American politics these days, so I wasn't really surprised when I saw bloggers quoting the following scenario from a question in the last presidential debate:

Here is the premise: Three shopping centers near major U.S. cities have been hit by suicide bombers. Hundreds are dead, thousands injured. A fourth attack has been averted when the attackers were captured off the Florida coast and taken to Guantanamo Bay, where they are being questioned. U.S. intelligence believes that another larger attack is planned and could come at any time. First question to you, Senator McCain. How aggressively would you interrogate those being held at Guantanamo Bay for information about where the next attack might be?

The Slate piece I linked to above responds with some hypothetical scenarios they should use at the next debate:

Gentlemen, here's the scenario: As you are flying home from Moscow—having told the world you will never deal with terrorists—hijackers, posing as reporters, seize Air Force One. They vow to kill a hostage every half-hour, including your wife and daughter, until you release a murderous Russian general. I'll start with Senator Obama. Do you negotiate with the hijackers in the hope of saving lives, or do you flee into the bowels of the craft, then pick them off, one by one, with makeshift shanks and your bare hands?

I'm hard at work alternately painting walls in our new apartment in Oslo and doing a pretty big translation job, but I do find some time to sneak in a little political work ("work") as well. This weekend I was at a seminar of the left wing of Oslos under-30 crowd, and I've got to say, I haven't felt this energised by politics in a long time. Not least by the fact that there seems to be a sort-of agreement that the thing to do is to try to build a broader left-wing alliance, to which I say: it's about time. On the left, we have been too fond of dividing ourselves into thinner and thinner fractions for a long time.

In my copious free time, I am attempting to find out why the socialist left (in Norway, at least - what's it like abroad?) is not interested in the idea of a guaranteed basic income.

(I like the Norwegian word better: borgerlønn, which means wage for being a citizen, or literally a 'citizen wage').

In Norway, only the centre-right liberal party Venstre is advocating this solution. I'm still just starting out researching the question, but everything I've been reading makes it more interesting as a potential, practical idea for a redistribution of wealth and power, and a radical restructuring of society. Not least because it increasingly seems to me to resonate wonderfully with socialist ideals. Why it has remained a centre-right-liberal idea in Norway is beyond me. I'm going to be looking into this for the next couple of months if and when I find the time.

But anyway, I just wanted to share this post at Crooked Timber with you: Should feminists support basic income?

Also check out the interesting discussion which follows. The post is a discussion of potential outcomes of a guaranteed basic income, as seen from a feminist viewpoint. What would happen to the role of women in a society with a basic income? It's possible that the gender gap in work/pay would widen, according to the author. Some interesting arguments, which would need to be taken into consideration if the basic income idea is going to work. The post is based on this 16-page paper (.pdf) which is much more thorough, but I haven't read the whole thing yet. Also more info and links in this post. I'm also going to have to read this article by Philippe Van Parijs, which I've seen several references to.

If anyone knows of any good books or websites discussing this, leave a comment. Also if you have any good arguments pro or contra to the idea. I need to find out more about this. 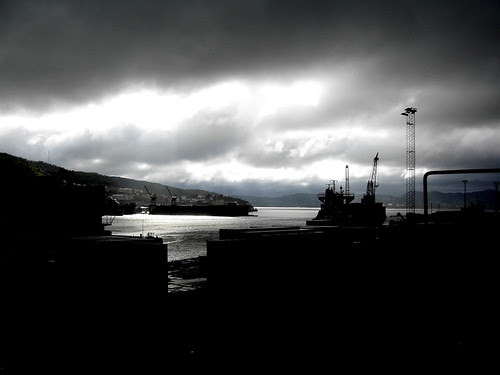 We're leaving Bergen for good today. We've sold the apartment. And everything is in boxes. Our train leaves in two hours. I'm pulling the plug on the modem now. I'm going to miss this place.

advice for the ambitiousm, young man who wants to get ahead in the world, by leonard woolf

Say, Lenny - can I call you Lenny? - you were a man of the world, you did all kinds of stuff, can I ask you for some advice?. You married Virginia Woolf (what a coincidence!), you wrote books, you did all sorts of political work, ran your own publishing house, and so on and so forth. Any helpful advice for a young man at the beginning of his career? Any cheerful thoughts to take with me on the way to...

Looking back at the age of eighty-eight over the fifty-seven years of my political work in England, knowing what I aimed at and the results, meditating on the history of Britain and the world since 1914, I see clearly that I achieved practically nothing. The world today and the history of the human anthill during the last fifty-seven years would be exactly the same as it is if I had played pingpong instead of sitting on committees and writing books and memoranda. I have therefore to make the rather ignominious confession to myself and to anyone who may read this book that I must have in a long life ground through between 150,000 and 200,000 hours of perfectly useless work.
-- Leonard Woolf, The Journey Not the Arrival Matters

Here's an interesting interview with David Maisel. Maisel is a photographer who takes nearly-abstract aerial photographs from a great height. The interesting thing is the parallel between that work and his work making closeups of metal canisters containing the ashes of mental patients.

Susan Haack disses Rorty. I might write something about this at some point.

Here's a series of posts written by James Macdonald, a science fiction writer and volunteer EMT, on emergency medicine. Informative and user-friendly.

Paleo-Future is a blog that chronicles the futures of the past. Very Gernsbackian.

Scott Rosenberg: "There is no 'first blogger'." He's very right. Also a nice little kick in the shins to Tom Wolfe at the bottom of the post.

I returned today from the hinterlands beyond the internet and cell-phone to find this beautiful piece of software about to change parts of our perception of data. It seems the cyberspace-ish variant of the internet might actually happen after all, what with all this new touch-screen technology and now this. And Microsoft is actually making this.

Here's the demo version. Only 5 megabytes. Only for Windows (obviously).

Oh, and holy crap what a trip to the Great Wild, Untamed North. Vesterålen is the new Grand Canaria. More on this later.

It seems almost impossible, but we are going to a place with neither
internet nor cell phone connections. We will be cut off from the world
for days beyond that nebulous borderline on the frontier of the
internet. The undiscovered country from which no traveller has
blogged. The places in the world which know no emoticons. Surely an
opportunity for landing ourselves in the middle of an Agatha Christie
novel. Wish us luck.

Testing testing. One two. Is this thing on?

I sent the last one to the wrong address. This one should be right, though.

[mmyes, but it got saved as draft. 3 times a charm]

I'm testing mobile blogging. What I'm doing is mailing a post via my
gmail app on my nokia n70. Even w my mad thumb skillz, it takes
forever to type. Does it work?

The city of São Paulo completely banned advertising. That's just totally, mindblowingly awesome and makes me hopeful for the future, in general.

I always think of advertising as signals with very high volume and very little content. Like people with megaphones in a crowd of people, shouting incredibly simple messages: "BUY THIS!" "THIS PRODUCT FEELS GOOD" etc. Now the billboards of São Paulo have become huge loudspeakers broadcasting simple, peaceful messages of sky and emptiness. It's very zen & I love it.