Speaking of newspapers gossip rags, The Wire-creator David Simon* has a piece in the Washington Post on the decline and fall of American newspapers. And while Salon creator Scott Rosenberg rightly pins him as longing for a golden age that never was, Simon makes some good points about the current state.

Well, sure, John Maynard Keynes was a big, important economist. But let's talk about substantive issues, here, like his sex life. What was he doing? And with whom? Inquiring political minds need to know! Luckily his sex diaries tell us everything we could possibly want to know. For instance: did you know - I didn't - that he was schtupping fellow Bloomsburyian Lytton Strachey? Those brilliant, bonking Bloomsbury bisexuals.

Dying in front of the lens

Suitcases belonging to Robert Capa, containing thousands of negatives from the Spanish Civil War have been found. Certain members of the Larsen family who have written profusely on the question of the authenticity of the "Falling soldier" picture are no doubt thrilled.

In other, photography-related linkage, this video shows how a camera lens is made. It's an intricate process, taking six weeks. What I like most about it is how messy the process seems, but how perfect the result is.

When the philosopher Baruch de Spinoza wasn't writing huge, monumental works of philosophy, he was a lens grinder. Put another way, he was a lens-grinder who wrote philosophical books. He died of phthisis - tuberculosis caused by inhaling irritants: fine, glass dust.

If you are like me in that you feel that the great, commanding metaphor or symbol for the Bush administration has yet to be found ("Mission Accomplished" was close, but not quite there), I believe I have something here that you might be interested in.

Wait, what? The Daily Show is back on the air? Make my month.

the most unintentionally funny book cover in the history of mankind.

Via Making Light (sidebar), a beautiful and strangely upsetting Flickr set of a Detroit book depository devastated by fire and left to rot.

(visual here, and also this pyrotechnical combinations game, from when he was 13)

Real, Actual People That I Have Met Being Killed By Terrorism

The Taliban launched an attack at the Serena hotel in Kabul a few hours ago. The Norwegian foreign minister Jonas Gahr Støre was staying at the hotel and attending a meeting at the time. He was one floor below the suicide bomber, but was not injured. A Norwegian reporter from the Dagbladet newspaper was killed by gunfire. I've seen both of these men in real life. Støre just two months ago.

Foreign policy as we experience it is mostly just ink on a page or pixels on a screen, but suddenly it zooms up very very close. The accelerating speed at which the world can go from being very far away to killing someone standing next to you seems to be rapidly becoming how we think, hohttp://www.blogger.com/img/gl.link.gifw we have to think, of globalisation. Even in this, the most shielded and padded corner of the world. But there is something hypocritical about this, isn't there? About how important it suddenly gets when it's people we've vaguely seen in the middle distance sometime?

The UN Secretary General is saying Støre was the target, and this shows that we must strengthen security. The Taliban are saying they didn't even know Støre was in the building, they were just gunning for NATO personell in general, but oh by the way would we mind terribly pulling our troops out of Afghanistan?

Update: Daily Kos has a post, too with more info in English on Norwegian Afghanistan policy and some background on the hotel. 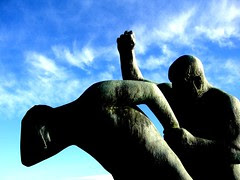 I finally - thank you, Flickr stats - found the page that was referring readers to my photo "Punishment", driving the viewings of that photo way up to 14.000 hits. Turns out, it was a Japanese gaming site. I'm happy that they wanted to use the photo (and happy that 14.000 people thought it was interesting enough to click on!), I just wish they could have asked first, especially since it's obviously a commercial, possibly even corporate, site with advertising. That upsets me. Rule 1 for collaborative media: always ask first. Unfortunately, the whole thing is in Japanese, so I can't find an email address to adress the problem.

Note, also, how the photo amply illustrates the evil, corporate fist smashing down on my rights as an artisté.

One more for the blogroll

Via the always wonderful Acephalous, I found this very interesting blog: Zunguzungu. Straight to the feedreader.

He has just posted two wonderful, knowledgeable, well-written posts on the situation in Kenya. "What I don’t know, the Washington Post doesn’t know even more" is pretty much the opinionated version of the article we should have had in our morning papers today. "Fears of Regional Instability as Iowa explodes into Ethnic Violence" is the one we did have, wizh a twizt.

More generally, I've been very encouraged lately by finding, in a short period of time: e.g. The Edge of the American West, Paul Krugman, Zunguzungu... blogs* which are written by people who are

a) Experts in their fields. As well as
b) polymaths, knowledgeable in other fields.
c) Write really well.

This gives me hope that the blogosphere is capable of moving both towards the netroots-organization of e.g. Daily Kos, but also towards some sort of new mode of public expert intellectuals who participate in the day-to-day changing of the rhetorical guard, of analysing the news and responding to the ideas of others. People who have, say, academic knowledge, but still choose not to waste their talents on the Journal of the Econometric Analysis of Advanced Eggplant Parmesan, as Michael Bérubé put it, but engage in public discourse because that's where knowledge is put to use and makes a difference in politics and in the discourse which shapes it. And these people see the value of placing themselves in the public sphere exchange of blogging: it is like open-source thinking. You work out loud and share your ideas.

And what I find so heartening is that the progressive netroots movement in the US, like Kos or Atrios, is so actively converging on the experts, using them, and responding to and being responded to by them. Paul Krugman's** ideas are routinely being thrown around and responded to in the netroots' discussions, while Krugman, on the other hand, responds to the ideas and movements in the progressive blogosphere, just as likely to quote Kos or Atrios as he is to quote some obscure economical article (from the aforementioned Journal of Econometric Analysis of Advanced Eggplant Parmesan), or other blogging intellectuals like Brad DeLong or Ezra Klein. Blogging expert intellectuals have been around for a while now, but the rate of interplay between the institutional intelligentsia and the political activists is, I think, somewhat new, and it's a Good Thing. I'm hopeful it will revitalise the stagnant public sphere of the US, and I think I see something similar starting to happen (although slower) in Scandinavia now.

** I just finished his book tonight. I'll try to post on it in a day or two. 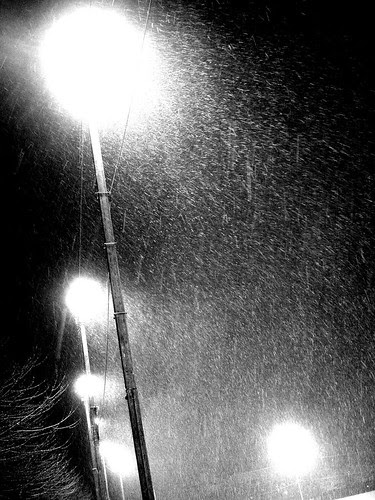 Added a bunch of new blogs to my long-neglected sidebar. Some that are on my "daily" list, others that I check in on every now and again.

Other neglected projects I will complete as soon as I find the time:

Also, I'm 27 today. It's my birthday. Which is pretty cool, because that means sometime this year, I'll have been alive for 10.000 days. And you all know how much arbitrary turning points in our numerical system means to the universe!

Via Daily Kos, I got this number crunching from the Group News Blog. It's a summary for the total Iowa caucus:

Looking good. But remember: that Huckabee, he has such a firm handshake.

An expanding market for the cosmetics industry

Mark Story has taken some stunning portraits of people who have been worn by age. Some have lived in both the 19th, 20th and 21st century, while others just looked unusually worn for their age. The descriptions of the lives of the supercentenarians are oddly poetic, as though these people have already become living stories about themselves.

Both of her parents were slaves.

The family ate the food they grew.
She never watched her diet
and was never heavy.

She never smoked or drank,
and was 100 years old when
she first saw a doctor.

I love the fact that there are still people alive with slaves for parents. Makes you understand how the distant past is not so distant after all.

Note that "Tested. Ready. Now." Is an even less meaningful phrase than Clinton's challenge-solving in the previous post. Not to mention that the rest of the video is bats-in-the-belfry-insane.

Hilary Clinton: "after all the town meetings, after all the pie and coffee, it comes down to this: who's ready to be president and start solving the big challenges that we face..."

What? You can solve a challenge? I thought you could rise to meet it, or face it, or whatever. You solve problems.

Anyway, I remain solidly undecided on which of the three democratic candidates to root for. I think Kos actually expresses my feelings pretty well in this post. I'd be happy with any three of these, against the freak show that the GOP has. All of the contestants for the conservatives are empty haircuts, fat wallets and Bible-thumpers. Some of them, like Huckabee and Romney, actually have the potential to be worse than Bush jr.

Calvin and Hobbes: the complete archive. I grew up on this stuff. Looking back on it now, I think I learned more about philosophy and ethics and dealing with modern life from Calvin & Hobbes than I did from all of 6th grade.

As the guy from whom I stole this link (whose URL I have now misplaced, unfortunately) laconically stated: "I hope you weren't planning on doing anything today."

Yesterday at dinner* I made this big speech about how I had no idea what 2008 was going to be all about, and that I had to find out. At the time, I meant it in a slightly angsty, existential-vacuum kind of way. But after my hangover cleared up around dinnertime today, I got to thinking that not even knowing what you are going to do can be a blessing. I get to change my life this year, and I'm hoping that's a good thing. We have a great life in a new city, good friends, a new year and 16 year-old scotch. What more can a man ask for?

Since you were wondering:

Appetizer:
Mushroom soup with chantarelles and barley, bresaola, my pain a l'ancienne (which is French for really old bread).

Spice girls pears (yes, those spice pears - they've been sitting in a glass in my fridge since then, and had totally soaked up the spices) with vanilla ice cream and raspberries.

I should quickly note that the lovely and talented Mikkel B made most of the cool stuff in the menu.

One of the simplest ways I have ever encountered of completely changing the presentation of a familiar taste, courtesy of Ellen & Frode:

Find some nice, tasteful tomatoes (I use smakstomater), not too big. Slice in half, sprinkle with salt and pepper and some spice (tarragon, parsley or basil are all good, but only use one and not too much).

I mean, sure, you have to be home all day, but when those things are done, they do gastrogymnastics on your tongue. If I had to describe it, it is like the tastes that usually make up the already pretty complex taste of the tomato have been amplified and segmented into a 15 or 30 seconds long, immensely complex flavour. It starts out sweet, then shifts into salty and meaty/umami for a while before finishing on an almost painfully sour and acidic note as you crunch the remains of the tomato skin. They are perfect accompaniment to dense fish, meaty or gamy dishes.